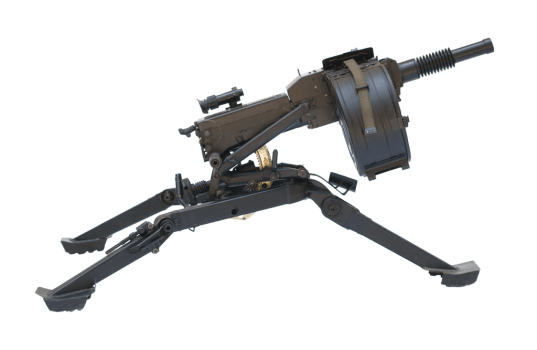 Description
Technical characteristic
Images
Video
Description
Automatic grenade launcher M93 is an infantry weapon intended for annihilation of covered and uncovered live forces at distances up to 1700 m, as well as for distruction of light armoured combat means at distances up to 1000 m.
Reliability of its functioning in various climates and terrains was confirmed by strict testing methods, in accordance with military standards.
M93 can only fire bursts, but the rate of fire can be from 50 to 400 grenades per minute.
The interior of the barrel is chrome plated, which provides long service life and precision of the weapon.
The weapon is fed from a belt with the capacity of 29 grenades, placed in the ammunition box. The launcher can fire grenades with anti-personnel, anti-tank, incendiary, smoke and training projectiles.
The design of the tripod enables quick change of combat position. Depending on tactical requirements and at the customer’s request, the automatic grenade launcher can be mounted to various types of combat vehicles.
Complete set:
Optionally, at customer’s request, the set can include:
Technical characteristic
Images
Video