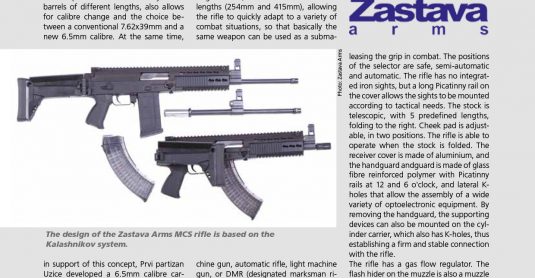 Following the trends in tactical requirements for the use of automatic rifles, Zastava Arms has developed a new MCS model. Compared to other manufacturers, Zastava Arms went a step further by offering a rifle that, in addition to easy barrel replacement and the ability to use barrels of different lengths, also allows for caliber change and the choice between a conventional 7.62×39 mm and a new 6.5 mm caliber. At the same time, in support of this concept, Prvi partizan Uzice developed a 6.5 mm caliber cartridge based on cartridge 6.5 Grendel for military purposes. The reason for the introduction of the new caliber is that the 6.5 mm cartridge has a number of ballistic advantages over 7.62×39 mm that allow for significantly bigger range, as well as better efficiency and penetrating power at all distances, while maintaining all vital parts of the rifle and with just replacing the barrel and magazine to change to a different caliber. Easy change of caliber has a number of logistical advantages in terms of easy adaptation to various environments.

The design of the MCS rifle is based on the existing rifle platform by which the Zastava Arms is recognizable and that operates on the Kalashnikov system. The modification is reflected in the design of the cross latch on the receiver, which allows easy and quick replacement of the barrel, without disassembling the rifle and without the use of tools. In addition to barrels in different calibers, within a single caliber, there are different barrel lengths (254 mm and 415 mm), allowing the rifle to quickly adapt to a variety of combat situations, so that basically the same weapon can be used as a submachine gun, automatic rifle, light machine gun or DMR (designated marksman rifle). Changing the caliber of the rifle also requires the change of magazine, and the magazines are clearly marked and noticeably different. Magazine capacity for caliber 7.62×39 mm is 30 rounds and for caliber 6.5 mm magazine capacity can be 25 and 20 rounds.

The rectilinear upper side of the receiver has a full-length Picatinny rail. In the receiver cover there is a centrally mounted charging handle (like the HK 416 model), allowing for easy handling for both right-handed and left-handed shooters. The charging handle is of non-reciprocating type, that is, it does not move with the bolt carrier and the bolt. Fire selector is ambidextrous, positioned above the handgrip and easily accessible without releasing the grip in combat. The positions of the selector are safe, semi-automatic and automatic. The rifle has no integrated iron sights, but a long Picatinny rail on the cover allows the sights to be mounted according to tactical needs. The stock is telescopic, with 5 predefined lengths, folding to the right. Cheek pad is adjustable, in two positions. The rifle does not lose its function when the stock is folded. Receiver cover is made of aluminum. Handguard is made of glass fiber reinforced polymer with Picatinny rails at 12 and 6 o’clock, and lateral K-holes that allow the assembly of a wide variety of optoelectronic equipment. By removing the handguard, the supporting devices can also be mounted on the cylinder carrier, which also has K-holes, thus establishing a firm and stable connection with the rifle.

The rifle has a gas flow regulator. Flash hider on the muzzle is also a muzzle brake, and the standard thread on the muzzle also allows the assembly of other devices (muzzle devices).

The rifle’s ergonomics are remarkable because, in addition to ambidextrous commands (charging handle, magazine release, fire selector), the shape of the stock and weight distribution ensure a balanced system without major recoil. The weight of the rifle with an empty magazine is less than 4 kg.

MCS rifle represents a significant step forward in the offer of Zastava Arms models, and the fact that it is in the phase of testing and adoption into the armament of the Armed Forces of the Republic of Serbia speaks about the importance of this model and the applied concept.